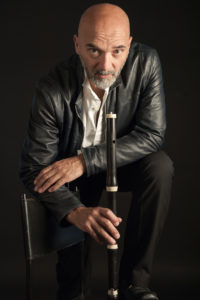 Carlo Ipata’s musical career has been characterized since the beginning by a passion for early music as an inexhaustible source of knowledge of the history and the aesthetics that today are still distinguishing our culture.

With the Auser Musici components, who have been chosen among the best Italian and European musicians, he explored the enormous unpublished theatrical and instrumental repertoire of the Renaissance and Baroque period, basing his choices on historically informed principles.

He has also directed the Orchestra del Maggio Musicale Fiorentino in Didone abbandonata by Leonardo Vinci and the Orchestra Arché in Il convitato di pietra by Giacomo Tritto.

As a soloist he has received the Gramophone’s Editor’s Choice for the first volume of Neapolitan Flute Concertos (Hyperion).

He lives in Pisa with Celine, Emma, Francesco and Lucien.