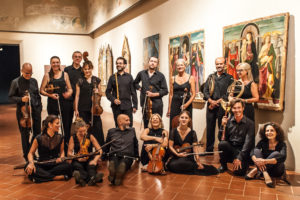 The ancient river of Pisa, Auser, and therefore Tuscany, are ideally the starting point of the route undertaken by Auser Musici, who since 1997 enthusiastically explores the musical mosaic that was the Europe of the Sixteenth and the Seventeenth centuries.

Under the conduction of Carlo Ipata, AM has created a long series of precious unpublished Opera’s works including Antonio Cesti’s The Disgrazie d’Amore or Francesco Gasparini’s Il Bajazet.

With variables staff, from chamber music to orchestra, and always under the conduction of Carlo Ipata, AM has restored the “Italian” role of the traversiere with the recordings of the sonata op. II by F. Barsanti, the concerts by Pietro Nardini, the quintetti op. 19 by Luigi Boccherini and above all with two volumes of Neapolitan Concerts by authors such as Jommelli, De Majo and Perez (Gramophone editor’s choice).

In 2017 AM celebrated its 20 years with the production of the Catone by Haendel, and with two great productions: Didone Abandonata by Leonardo Vinci (with the Opera di Firenze – Maggio Musicale Fiorentino) and Il Girello by Jacopo Melani, during Pistoia Capital of Culture and with the extraordinary staging of the Fratelli Colla’s.puppets.

Auser Musici benefits from the support of the Fondazione Pisa and is in residence at the Teatro di Pisa.