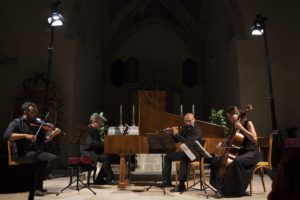 The spread of the fortepiano in Europe between the Eighteenth and Nineteenth centuries is the guiding principle of this program, where we find the typical taste of chamber music that spread in the Europe of that time in the trio of Haydn, in the sonata of Lidarti and in the original version of the K 466 Concert by Mozart that Hummel wrote for the British amateurs.